*Before you start reading, just pre-warning that this article is very much aimed at people who already call themselves Christians- it’s a ‘in house’ article. Feel free to read regardless of what you believe; just thought I’ll tell you though that it’s Christians who would relate mostly to this. 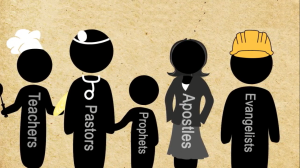 So I have this picture to illustrate the simple fact: there is no ‘hierarchy of holiness’ in the places and vocations God has called you to. Here’s what I mean: I have often seen a huge divide between a pastor of a church and a “regular” church member when it comes to gifting’s and callings. The pastor is often seen as the ‘professional’ in the faith whilst everyone else is not, and the “everyone else” can be viewed as the people who aren’t called to the ‘higher’ calling of pastoring a church but are called into the ‘world’ whilst the pastor serves ‘the church’. It’s the whole “higher” and “professional Christian” language undertones that scare in me in church circles.

Now don’t get me wrong, I am not inherently against being specifically someone who just so happens to also be a registered denominational pastor who co-leads a community. That’s okay. After all, Paul was an Apostle and didn’t hesitate to take seriously his very full on role in being someone who helps the specific church community in a more potent way than others. After all, you need those people who have that specific time to devote oneself to a community in such a way. So I am in no way ‘hating’ on those who are called to those specific roles. I have friends that I dearly appreciate who are in those roles and mean absolutely no disregard to the hard works that done. But what I am saying is this: that we must be careful that by these roles existing that they are professional Christians who, just because they are a pastor of a church,  somehow in an “elite” and “more sanctified” position because of what they do- whereas I want to say that there is no hierarchy of holiness.

You can be a plumber and have a gift of pastoring, or an accountant and be able to share your faith easily as an evangelist. You can even be all these things and discern a love and maturity sometimes beyond that of person who does have a church title. At the end of the day God has called all people who serve to Him to serve Him, and we have all be planted into the body of Christ, and every person has a gifting, whether they are an evangelist, a pastor, a prophet, a teacher, an apostle or whatever. These calling aren’t just for people who are planning to go into a church-denominational role.

We are all called to be the body. We have are all called to pastor, to evangelise, to prophecy, to have acts of mercy, to teach, to lead- but not all will be gifted to specifically have a  niches in all those things; you will have gifts that stand out as prominent in who you are made to be. So find your gift and serve were He has placed you. And yes, He might call you into a church-role whereby you also use your gift purely as your full time job (because I believe in that calling too), but if not, remember you are still the pastor, the evangelist, the prophet, the teacher, the mercy-giver the world so desperately needs, to be where God has put you in your specific vocation, location, and calling.

We are all called to the work of ministry. Because the work of ministry is exactly that…Ministering. And you can minister to the world in whatever title role or job you have. Bottom line I am trying to make is this: if someone has a pastoral role they are not better than you and it certainly doesn’t apply they are holier then you. You have the Holy Spirit working in you just as much as a denominational church leader role does. God has called both, but they are calling without elite distinction. Now lets love the world and one another.